Heidelberg Castle is known as one of ancient castles in Germany and a popular tourist attraction in Heidelberg. The castle retains the most important Renaissance structures in the north of the Alps.

Heidelberg Castle - the most famous castle in Germany 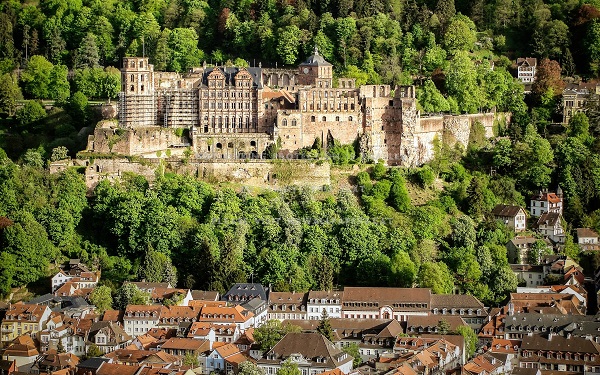 The breathtaking view of Heidelberg Castle

Located in the 80m-high hill above Heidelberg City, this spectacular castle is an icon of German romanticism, which attracts millions of tourists from all over the world. This is also one of the must-come destinations in Germany.

The castle is the result of a mixture of Gothic and Renaissance architecture. It has only been partially rebuilt since its destruction in the 17th and 18th centuries. The castle is situated on the north side of the Königstuhl hillside, above Heidelberg University. From the castle, visitors can enjoy a perfect view of the center of the age-old city.

Visitors can come to the castle on the Heidelberger Bergbahn funicular railway that runs from Heidelberg's Kornmarkt to the summit of Königstuhl.

The history of Heidelberg Castle

The earliest structure of the castle was built before 1214 and then expanded into two castles around 1294. However, in 1537, a lightning bolt destroyed the upper castle. And the existing structures were extended in 1650.

In 1689, the castle was looted and burned by the French army. In 1764, another lightning bolt caused a fire that destroyed some of the reconstructed sections. Later, the ruins continued to be plundered for use, such as the red bricks used to build new houses in the town.

Unlike many castles in Germany, Heidelberg Castle never regained its original glory. The question of whether the castle should be fully restored has been discussed for a long time. In 1868, the poet Wolfgang Müller von Königswinter suggested a complete reconstruction of the castle, which led to controversial topics in public meetings and in the press.

Until now, although the castle remains in ruins, it still retains its own charm. The complicated history, as well as the ancient architecture, add to the uniqueness of the castle. Each building highlights a different period of German architecture, and the ruins are considered symbols of German Romanticism. Heidelberg Castle, with its splendid beauty, is one of the landmarks of castles in Germany. 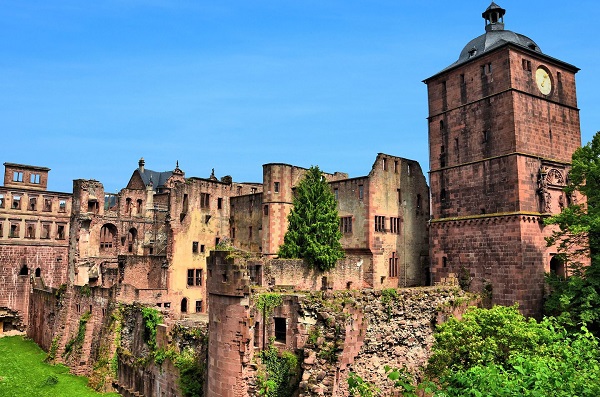 Although the castle remains in ruins, it still retains its own charm to the visitors

To visit the castle, you can start by admiring the castle from afar. Once you reach the castle, do not forget to admire the city and the iconic bridge. When walking in the castle, you will find it completely surrounded by elegant gardens.

For the full experience, purchase a castle entrance ticket to explore the spectacular architecture of the interior. A guided tour will help you to explore more through many interesting and mysterious stories about this castle.

The Ottheinrich Building is one of the earliest palace buildings of the German Renaissance, decorated with impressive sculptures. The Herrensaal (Knights' Hall) and the Royal Hall House have many special exhibitions. Fassbau (cellar) built in 1590, which houses Hidelberg Tun - the largest wine barrel in the world, with the storage of 220,000 liters of wine.

You can also stand in front of the Friedrich Building and listen to the stories of kings and queens and especially of Mark Twain, who visited the castle and was inspired to write a chapter of Huckleberry Finn. 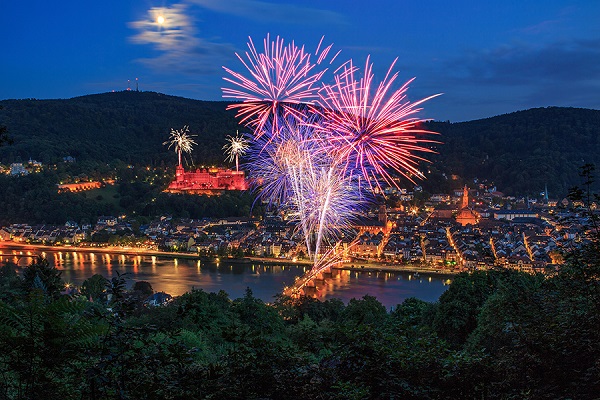 After climbing to the top, you may want to eat and drink. Old kitchens may not cater to the masses, but you might as well give it a try.

Ways to get to Heidelberg Castle

This castle is located at Schloss Heidelberg, 69,117 Heidelberg, Germany. It is 57 miles south of the financial center of Frankfurt City. There are many ways to get there:

When you reach the foothills of the castle, you can climb up on your own or take the cable car up to the castle. This 1.5 km stretch is the longest cable car route in Germany, reaching a height of 550 meters past the castle to Königstuhl. If you have chances to visit the city of Cologne, be sure to read through our list of the top famous tourist attractions here. Germany is famous for owning numerous beautiful and famous beaches. Find out the suitable one for your next beach holiday at the 6 best beaches in Germany on our list. Halle is the largest city in the German state of Saxony-Anhalt. Let’s explore the ancient city of Halle with us. Fairy tale beautiful lakes in Germany are located in many parts of the country. Each of them has their own attractions.